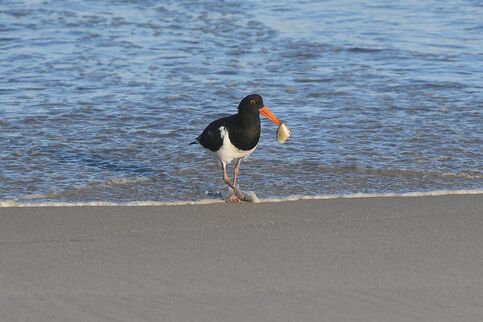 Photo by Sharon Taylor
Oystercatchers are typically seen probing the sand or mud with their long bills in search of sandworms, molluscs or crabs, sometimes hammering at their shells.

​Or they may be seen roosting at high tide, sometimes with other species, such as gulls, cormorants, waterfowl, Sooty Oystercatchers or other waders.

Pied Oystercatchers breed in pairs. A breeding territory of some 200m is formed and is defended by both birds. Nesting takes place on sand, shell grit or shingle just above high-water mark on beaches, sandbars, margins of estuaries and lagoons.

​ The eggs are well-camouflaged, being pale brown with darker brown and black blotches and streaks. Both sexes share parenting duties.  In recent years, Corrie Island has been a favoured nesting site.

They are a non-migratory bird and spend their whole life in the one location.
They are frequently seen in pairs at low tide foraging for food in the wet sand on the sand-spits at the western end of Winda Woppa and the Boulders as well as on Bennetts Beach, Hawks Nest.
​
The Pied Oystercatcher is classified as Endangered in NSW.  It is believed that up to two thirds of the entire state population resides in Port Stephens.
​
By Ian Morphett October 2021
Information from Birdlife Australia and the Hunter Bird Observers Club.
HOME | ABOUT | SIGHTINGS | NATURE | EVENTS | GALLERY | USEFUL LINKS | CONTACT
​For any sick, or injured wildlife, phone Wildlife in Need of Care (WINC) on 1300WINCWL (1300 946 295)