Around the beaches, river banks and sand islands in Port Stephens you may see these birds, individually or in groups, feeding or roosting during the Spring and Summer months

Eastern Curlews are the largest migratory shorebird in the world.
* They have a wingspan of 110cm and measure 63cm long from tip of beak to tail.
*Their most prominent feature is a long downward curving beak measuring around 18.5cm.
*Females are noticeably larger than males with a longer bill.
* We are lucky to have almost 1% of the estimated world population visiting us here at Port Stephens through Spring and Summer each year 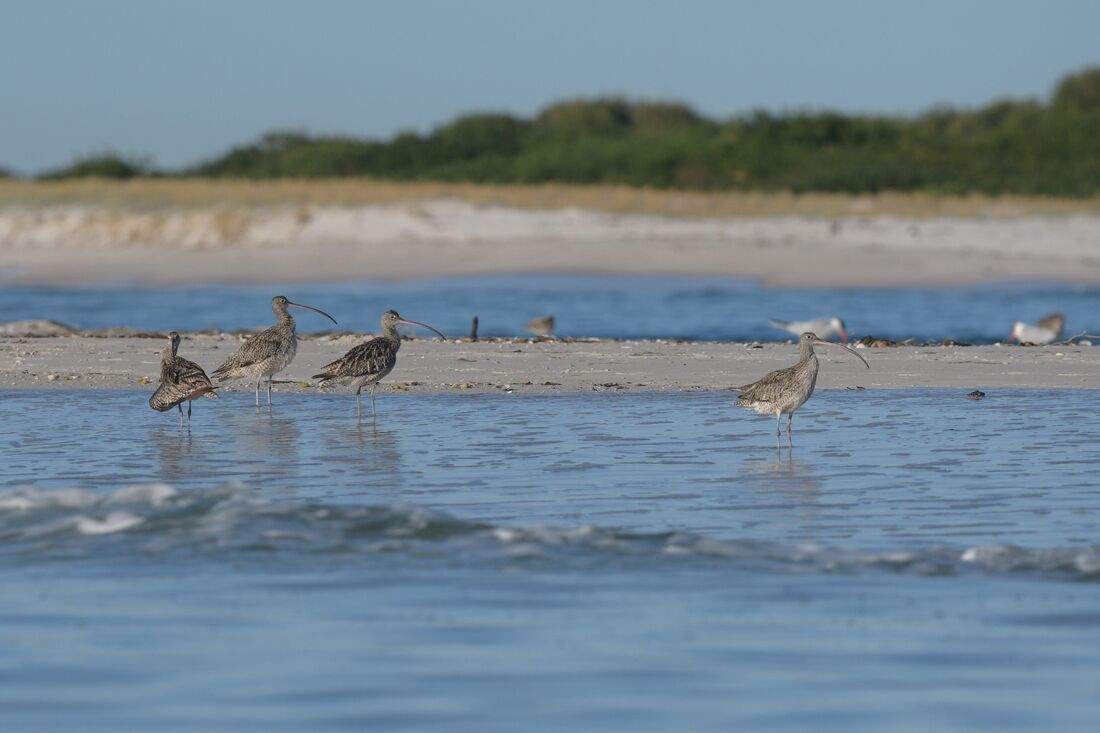 E Curlew feeding on sand islands near Winda Woppa
Whimbrel are a smaller bird that can easily be mistaken for an Eastern Curlew as they look similar with their dark streaky plumage and a downward curving bill. Whimbrel are usually around 42cm long. (see photo under Shorebirds)
However, as well as it's longer beak being visible in flight,  the E Curlew has a distinctive mournful call-  'Cuuuurlew' that carries across the water as it flies, and their wing beats are slow and deliberate as opposed to the rapid beats of the  Whimbrel. 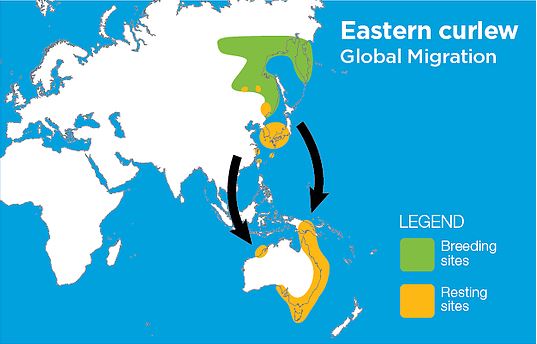 Eastern Curlews are annual visitors to our area from Spring through Summer as they spend their non-breeding season resting and feeding in suitable estuaries, bays and harbours all along the Eastern Seaboard of Australia. They leave their breeding grounds in Northern China and Russia around the end of August and undertake a flight of around 12000 kilometres, stopping briefly along the way to feed. Nearly 75% (estimated at 28,000 individuals) of the world population come to Australia, and Port Stephens is classified as an Internationally Significant site with 1% of the world population occurring here.

​They are also classified as critically endangered under the Environmental Protection and Biodiversity Act 1999 as their breeding, resting and feeding grounds are diminishing or changing, mainly due to the spread of human activity.
​
Using their long curved beak they probe the sand to dig for a range of small crustaceans and molluscs.
The large birds are wary and easily spooked, often taking flight when a person, or other disruptive presence is up to 250m away from where they are foraging or resting. This is thought to be detrimental by reducing available feeding times.
All migratory shorebirds require productive, undisturbed feeding and roosting sites in order to enable them to increase their fuel reserves for their return flight to Northern Hemisphere breeding grounds.