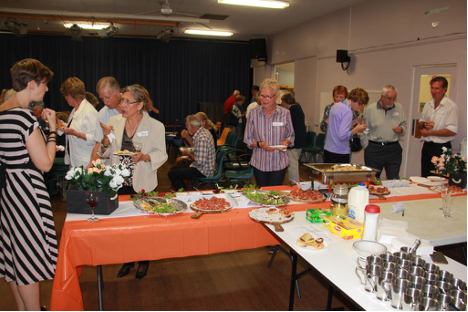 Weed, wine and dine at Hawks Nest Community Centre
Helen Kemp  (Assistant Environmental Officer) talked about the importance of backyards in controlling garden weed escapees. The recently conducted Backyard Bushcare Program found 75% of Hawks Nest properties have some species of asparagus, particularly around the Winda Woppa area. Asparagus fruits are like “bird lollies” and therefore the plants spread at an amazing rate. More than 50% of Hawks Nest residents have successfully managed environmental weeds in their backyards since the Backyard Program.

A Weed, Wine and Dine" evening to launch the Backyard Bushcare Program proved to be extremely popular when 50 people turned up at Hawks Nest Community Centre on Saturday 30 April.

Property owners and residents who took part in the Hawks Nest area backyard weed survey in 2015 were invited to hear about local biodiversity, weeds and what people could do in their own gardens to benefit the local environment.
Terry Inkson (Weeds Officer), Matt Bell (Senior Ecologist), Helen Kemp (Assistant Environmental Officer) and Isabelle Strachan (Bushcare/Coastal Catchment Support Officer from Great Lakes Council) all spoke, as well as Fiona Miller, a Ranger with Myall Lakes National Park.

A buffet was provided, and a glass of wine or beer offered in exchange for people bringing in a weed from their garden.
After presentations were made, time was given for questions and answers.

During dinner, people had the opportunity to mingle with the presenters, ask for specific advice, look at freshly cut examples of the worst weeds in Hawks Nest, chat with their neighbours and sign the Bushland Friendly Garden pledge in exchange for a “Proud to Have a Bushland Friendly Garden” sticker to be placed on fences, letterboxes, wheelie bins and cars to increase the visibility of people who have made the pledge.

Terry Inkson spoke about the Hawks Nest backyard weed survey done last year. He showed slides and graphs of the results and identified many photos of weed specimens. Terry also spoke about the consequences to the local environment when these weeds are allowed to spread such as African olive, asparagus weed (particularly prolific), glory lily, camphor laurel and many more.

He quoted 40 million dollars lost in primary industry in Australia due to weeds. Terry also mentioned a new invasive plant, alligator weed found for the first time at Jimmys Beach, which is a worry.
He said there had been good response from property owners when alerted to the presence of problem weeds in their backyards. Hawks Nest residents unfortunately like growing asparagus, especially round Winda Woppa.
​
Terry explained about correctly disposing of seeds and berries of all weeds in the red wheelie bin and the rest of the plant waste being put into the green bin.

Isabelle Strachan spoke about the successful work on the dunes by the Bitou Busters, paid contractors, students and aerial spraying over the last 15 years, as shown in the before and after photos.  Glory lily, now in Hawks Nest, is harder to eliminate than bitou bush.